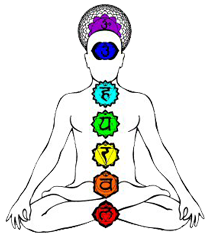 The chakras are not physical. They are aspects of consciousness in the same way that the auras are aspects of consciousness The chakras are more dense than the auras, but not as dense as the physical body, but they interact with the physical body through two major vehicles, the endocrine system and the nervous system. Each of the seven chakras is associated with one of the seven endocrine glands, and also with a particular group of nerves called a plexus. Thus, each chakra can be associated with particular parts of the body and particular functions within the body controlled by that plexus or that endocrine gland associated with that chakra.

Your consciousness, your experience of being, represents everything it is possible for you to experience. All of your senses, all of your perceptions, all of your possible states of awareness, can be divided into seven categories, and each of these categories can be associated with a particular chakra.

When there is tension in a particular part of your consciousness, and therefore in the chakra associated with that part of your consciousness, the tension is detected by the nerves of the plexus associated with that chakra, and communicated to the parts of the body controlled by that plexus. When the tension continues over a period of time, or reaches a particular degree of intensity, the person creates a symptom on the physical level. Again, the symptom served to communicate to the person through their body what they had been doing to themselves in their consciousness. When the person changes something about their way of being, they are able to release the stress that had been creating the symptom, and they are then able to return to their natural state of balance and health. Everything begins with your consciousness. Everything that happens in your life, and everything that happens in your body, begins with something happening in your consciousness.

Your consciousness, your experience of Being, who you really are, is energy. We can call it "Life Energy" for now. This energy does not just live in your brain; it fills your entire body. Your consciousness is connected to every cell in your body. Through your consciousness, you can communicate with every organ and every tissue, and a number of therapies are based on this communication with the organs which have been affected by some kind of symptom or disorder.

Order Name is required.
Save Order